In 2015-2016, more than a million refugees sought asylum in Germany. The School of Journalism responded by creating Missoula to Berlin, a summer program designed to teach international journalism in a real-world, breaking-news setting. Under the guidance of Dean Larry Abramson, Associate Professor Henriette Löwisch and Berlin photographer/filmmaker Shane McMillan, 18 students set out to document the crisis and bring the stories back to their communities. The group included writers, photographers, designers and researchers with a passion for storytelling.

Students worked through fall to help pay for their international reporting trip, by organizing fundraising events in Missoula and online. In the spring they began picking topics to report on, and pitched their story ideas.

Learning by doing is the motto of Missoula to Berlin. For the first time, the J-School’s International Reporting course culminated in a three-week trip overseas. In addition to instruction and lectures by faculty and experts, the team investigated Germany’s response to the crisis through interviews with refugees, officials and locals. Students edited and produced their stories for publication as part of the trip.

These are the stories that emerged from three weeks of reporting in Berlin.

Check out some photos by Shane McMillian to see the process behind the scenes: 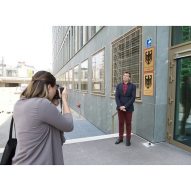 Kira Vercruyssen shoots a subject outside of the Federal Anti-Discrimination Agency in Berlin.

Our fearless leader, Shane McMillian, talks to the group on a tour.

The students listen to a guest speaker on the lawn of the Berliner Dom.

Greg Arno works on designs for Namik, his app for telling refugees’ stories. 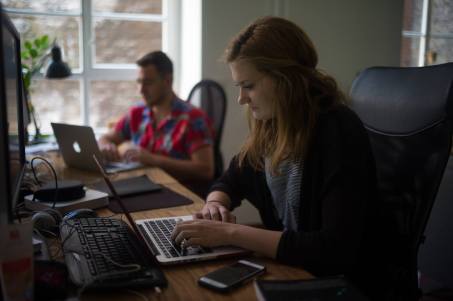 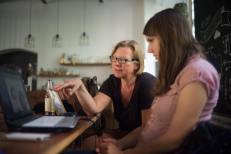 Henriette advises Verena Henners on her graphics and maps.

Christa Street works among a cluster of laptops and notebooks.

Verena Henners works on deadline in the beautiful Ecosia space.